Although you may not be familiar with its name, it’s very likely that you would recognize the iconic, poorly tuned whistle of the Calliope, especially when “Entrance of the Gladiators” by Julius Fucik is played on it.

Commonly associated with circuses and steamboats, this musical instrument reached its peak during the steam era.

That being said, once steam energy became a technology of the past, calliopes became less and less common.

What is a Calliope?

As we mentioned above, the calliope is essentially a steam organ, as it has a series of pipes that whistle when steam travels through them. Most commonly associated with circuses where they appeared in ornate, colorful wagons and steamboats where they became an essential feature, the calliope is most notable for its iconic sound — a nearly tone-deaf whistling that can be heard for miles.

Now, its tone-deaf nature is not so much an issue with the instrument as it is with the power source. Because the calliope creates its musical notes via steam-power, the temperature and pressure of the steam directly affect the instrument’s tonality. When the calliope is being played, steam builds in the pipes that are not being used until they’re cued, at which point the pressure is released, making the pipes whistle.

Due to the nature of the calliope, its music would often be slightly off tune, as equal levels of pressure were impossible to maintain, and the steam’s temperature could vary as the boiler produced steam.

Originally, the calliope utilized a cylindrical mechanism similar to that of a clockwork music box, that would cue notes as it rotated, allowing for music to be played without a musician. Eventually, keys were added to the calliope to allow instrumentalists to play compositions. Most commonly, the calliope had 32 keys, but key amounts have been known to fall in the 25 key to 67 key range.

The (Brief) History of the Calliope 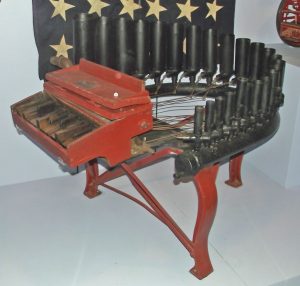 Around 1855, a man named Joshua C. Stoddard first patented the calliope with the hope that it would soon replace church bells. Much to his dismay, the calliope’s first audience was appalled by the off-tune music it created.

At this point, it is rumored that Stoddard gave the calliope to his brother who captained a steam boat. Due to the readily available steam that these boats produced, the calliope was an intuitive addition to the steamboat, and by 1858 they were commonplace features of any steamboat.

In 1859, a man named Arthur S. Denny tried to sell the “Improved Kalliope,” a calliope that offered the feature of controlled pressure, which would allow the instrumentalist to control volume and try to control its tonality, however, it never took off.

Thomas J. Nichol was a trademark calliope-crafter who was famous for the calliopes that he made in Cincinnati, Ohio. He was in operation from 1890 until he died in 1932. Decades later in 1985, a man named David Morecraft continued Nichol’s legacy, creating Thomas Nichol style calliopes until his death in 2016.

Unfortunately, the calliope’s prominence died at the end of the steam-powered era, but that doesn’t mean they ceased to exist. Today, one can witness a functioning calliope on any operating steamboat, some circuses, and music museum alike. In addition, the calliope has made its fair share of appearances in famous studio-recorded music.

For instance, the Beatles utilized recordings of Sousa marches being performed on the calliope for their song “Being for the Benefit of Mr. Kite!” on the album “Sgt. Pepper’s Lonely Hearts Club Band.” Tom Waites of the Velvet Underground has a song called “Calliope” featuring the calliope on his album, “Blood Money.” Additionally, King Crimson’s song “The Court of the Crimson King” off of their album “In the Court of the Crimson King” features an entire calliope section! These are only a few examples of calliope use in contemporary music.

If you’re still itching to hear calliope music for yourself, the internet offers myriad video demonstrations of the instrument for you to indulge in.

Although we don’t tune or fix calliopes, Whitesel Organs feels that the calliope holds significance in organ history as a whole. That being said, if you are in need of organ tuning or repairing services, contact us today!